Summer of Love Parade #4 from Dudley1230 on Vimeo.

video and photos by Rob R

PHOTOS OF THE PARADE:

Rob’s account is under Dudley1230 in case you need to search for it. I think the issue people my have is they need a Flickr account and the safe search function must be turned off. This is a requirement of Flickr because of the nudity.

Summer of Love Parade, August 18, 2019 from StevenTorrey on Vimeo.

the above video is by Steven Torrey 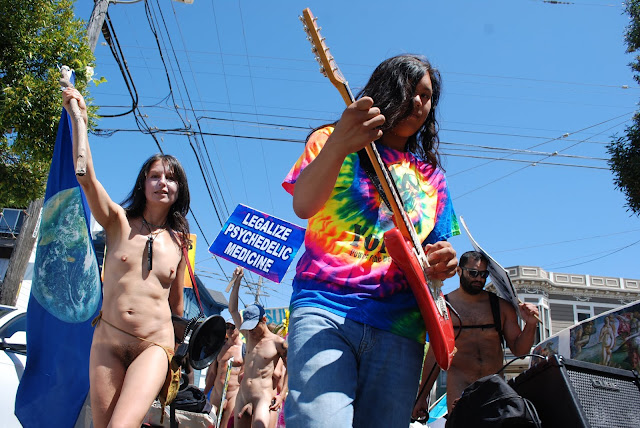 Thank you for coming today to celebrate The Summer of Love with us!

I am Gypsy Taub. You can find me at www.MyNakedTruth.TV and at www.JerryGarciaFamilyClinic.org

Today we will march through the streets of San Francisco from Jane Warner Plaza to Haight Street and Golden Gate Park and back. Our 4th annual Nude Summer of Love Parade is dedicated to Jerry Garcia and his big family – people whose lives he touched and permanently changed, people whose hearts he healed through his music, his love and his magic.
For those of you who are unaware, Jerry Garcia was the leader of the Grateful Dead, the most legendary and the most mystical band in the history of humankind. It is really hard to explain what the Grateful Dead was about to someone who wasn’t a part of that scene. I can only make a humble attempt. I can only try to put in words my personal experience that was far beyond words.

I have to admit that I was quite an arrogant nerd at the time. I mainly valued intellectual activities. I wanted to get a PhD in science from Harvard or MIT. I thought that men with long hair were a bunch of losers and not real men. I was adamantly against ingesting anything that might threaten logical perception of reality. I was the only person in my class, if not in my entire school in Moscow who had never tried alcohol, and drugs were definitely a 100% no-no and a threat to my outstanding ability to do Calculus and use scientific formulas. A few years later I was accepted to UC Berkeley and planned to become a psychiatrist. I was one of the best students in my hard core science classes. I took 50% more classes than what was considered full time and got straight A-s.

I was an overachiever and a workaholic. I thought Grateful Dead fans were a bunch of lazy stupid people who had nothing better to do than roam around the country blindly following some band that doesn’t even sound good.
Everything started to change when my friend Bob who had purple hair down to his waste had a conversation with me while on LSD. His thoughts were deep and unique, his thinking seemed more creative than usual, his feelings were beautiful. I became intrigued. After all, I wanted to know everything. I felt that I was missing out on something worth experiencing.
This led me to my first LSD experience that changed my life. I got in touch with my true self, with my own inner beauty, with the depth of my love.

I had a few friends who were Grateful Dead fans. I didn’t like the way their music sounded on the radio. I was told that the best way to really understand their music was to go to a show, especially on psychedelics.
I was dating a long-haired musician Scott who was a big fan of the Grateful Dead. He took me to my first Dead show in New York. I dropped a hit of acid and was very unpleasantly overwhelmed by the hectic crowd and the lights that seemed way too bright. It was scary and gave me a lot of anxiety.

Everything changed when the music started playing. I don’t remember exactly what happened next. All I can say is that years later I realized that that night was like a rebirth, a new beginning of something that took me in a completely different direction. It took me to my soul. It showed me that my destiny was not about making an impression through intellectual achievements. It showed me that my destiny was about love.

I remember how Jerry Garcia sang China Doll, which became and to this day remains my favorite song of all times. The rest of the Universe faded away. It seemed like there was no one else there, just me and Jerry. Jerry touched my heart so deeply. For the first time in my life I felt that I was not alone. I felt that Jerry was the only person out there who really knew my pain.

A few month later I was at a concert in Boston. Once again, I took my medicine. I took LSD. The music sounded more and more amazing, more and more divine as my journey unfolded. Then there came a point when I saw light and was taken over by limitless love and the feeling of oneness. I realized that everything in the Universe was made of love and that I was one with it. I felt an all-loving presence that was as big as the Universe itself. Jerry Garcia introduced me to God.
Needless to say, my life was never the same. I became one of the most dedicated Deadheads. I went to as many shows as I could and in 1995 joined Grateful Dead for their last spring tour. The love and the emotional, mental and spiritual liberation that I experienced were beyond my wildest dreams. Cradled by the crowd of beautiful, gentle people, my soul healed and my spirit soared. Other people called us hippies or Deadheads. We called each other “family”.
I was showered with love at every show and in between shows while traveling with the Dead and the Deadheads. My heart was on fire. It was filled with an overwhelming desire to share this love with the world. That’s why I am here today. That’s why I became a mother and then an activist. That’s why I became a healer.

I am here today to share this love with the world through psychedelic medicine and music.

We use music and psychedelics to heal street kids in Mexico from early childhood abuse, from PTSD and addiction. I called our psychedelic rehab Jerry Garcia Family Clinic. You can Google it to find more information about our work with the street kids.

In conclusion I want to celebrate our land slide victory on June 4th this year when Oakland City Council decriminalized a number of psychedelic plants in a unanimous vote after hearing countless testimonies of people whose lives were changed with the use of this medicine.

Psychedelics include magic mushrooms or psylocibin, LSD, MDMA or ecstasy, ibogaine, ayahuasca, peyote, DMT and a few others.
Psychedelics are very successful and very safe in treating addiction, PTSD, depression and many other emotional disorders as has been documented in endless online publications, documentaries, research papers, videos and written testimony by the public at large.

We are here today to celebrate body freedom and freedom of the mind. Our minds and bodies are ours and no government has the right to decide how, when and where we should dress or undress and what we can or cannot ingest to liberate our minds and to communicate with higher consciousness.

Please embrace this freedom in your personal life and please help us create a world where everyone is free to decide what kind of emotional, mental and spiritual experience they choose to have. Let’s liberate this planet together!

our permit for this upcoming nude parade has just been approved.
Join our 4th annual Nude Summer of Love Parade and rally to legalize psychedelic medicine in honor of Jerry Garcia sponsored by Jerry Garcia Family Clinic. Watch our previous parades at www.MyNakedTruth.TV

We will march through the streets of San Francisco from Jane Warner Plaza to Haight Street and Golden Gate Park and back. This parade is dedicated to Jerry Garcia and his big family – people whose lives he touched and permanently changed, people whose hearts he healed through his music, his love and his magic.

We will march to legalize psychedelic medicine in San Francisco and the rest of the world and to reclaim our birth rights – our rights to body freedom and freedom of the mind. Our minds and bodies are ours and no government has the right to decide how, when and where we should dress or undress and what we can or cannot ingest to liberate our minds and to communicate with higher consciousness. Our parade is fully permitted by the SFPD. No one will be cited nor arrested. For last minute changes and more info go to www.MyNakedTruth.TV

JERRY GARCIA FAMILY CLINIC – www.JerryGarciaFamilyClinic.org – was established in Mexico in 2016 to help street kids get off of meth, glue and other hard drugs with the use of psychedelics, music, herbs and a lot of love. Our primary medicines are iboga microdosing and ibogaine treatments. All our treatments are 100% voluntary. Our results are phenomenal and unprecedented. Please go to our website and watch a 5-minute documentary about our healing work. And please donate to our GoFundMe Campaign: https://www.gofundme.com/f/3sj4e2-a-cause-i-care-about-needs-help

IBOGAINE TREATMENTS AND TOAD MEDICINE – contact us if you or anyone you know need help with addiction, depression, PTSD or any other emotional problems. We provide ibogaine treatments with the highest quality medicine. We have very loving and caring providers. All proceeds go to our street kids rehab in Mexico.